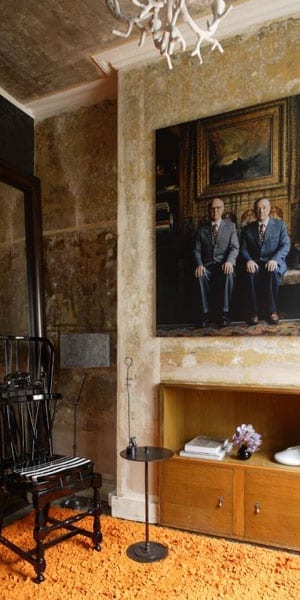 On returning from a Mother’s Day outing to Luton, myself and Claire (my editor in chief) stumbled upon a small hotel – Rough Luxe – on Birkenhead Street opposite King’s Cross station. The name caught my attention and as we were peering in the window a man was looking out and, thinking he recognised Claire, popped his head out the door. This was Antonio, a handsome and playful gent who invited us in to have a look around.

Shabby Chic could be the generic term for a hotel like this, but it proved more than this. It is a grade II listed building and has distressed walls for starters but it also has some beautiful artistic light fittings and other pieces of art around the place. In the small lounge area is a portrait of Gilbert and George, presumably a self portrait, and also an unusual functional art chair comprising of three different wooden chairs (Ercol included, to my delight!). The light fitting above was antleresque in a white clay-like material by Maarten Baas. Thick red stripes bordered the bare wooden stairs that lead down to a small breakfast room with a beautiful wooden table by Piet Hein Eek, surrounded by a selection of mismatched chairs. The kitchen looked pretty much like an old seventies kitchen, but  with a big new Smeg fridge and a Nespresso machine.

They manage to combine cheap materials and beautiful fabrics, furniture and art, and old and new to great effect. Antonio talked very enthusiastically about the different designers that have been involved and seems to know some of them personally. He obviously enjoys living and working there, in fact their booklet even states “If you are stuck for something to do in the evening, let know and you can either eat with us or we can go out and grab a bite.” This illustrated booklet also includes fine eating and drinking establishments which are mostly tucked away on side streets – Cabbies: Pick one up!

Antonio encouraged us to pop in for coffee any time and then finally showed us into the back office to unveil their  piece (of art) de resistance – “The Anger  Release Machine” by Yarisal and Kublitz – a regular vending machine but loaded with random pieces of china, some with royal faces and some with 70’s pattern. In the dispensing drawer below were several blunt spikes to assist the breaking fall. Below was over-full and I speculated that, if I were to use it, my chosen china would possibly not break and I’d end up completely infuriated rather than just plain ol’ angry!