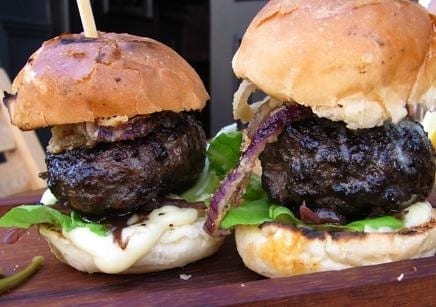 Burgers and other bites

Having picked up waiter/pop-up restaurateur Max Halley recently, I was very much looking forward to a visit to Opera Tavern in Catherine Street WC2 – a tapas restaurant which was formerly a pub, where he works. He’d told me about their mini pork burger with foie gras mixed in the mince which I was excited about, and this did not disappoint. They have tin pigs (not on menu) standing around the place which Claire & I thought very cute.

We then popped into The Delauney (the new sister brasserie to The Wolseley, but with a far nicer unreserved area), where you can have tea and cake. They also have a more casual cafe next door, The Counter, with softer prices where I’d feel more relaxed just ordering a coffee.

Now burger restaurants seem to be popping up relentlessly and I’ve tried many, but reckon you’d be hard pressed to find a better one than Bar Boulad downstairs at the Mandarin Oriental Hotel. Byron continue their rapid expansion with a new one on The Cut near Waterloo where Live Bait used be. I like them better than Gourmet Burger Kitchen (GBK) but I get 2 for 1 there with my Taste card, so only pay Byron an occasional visit.

Another new hotspot getting sound reviews is Burger & Lobster (limited menu £20 for either one of them with sides) in Clarges Street. My local Brixton Market is getting lots of hype in Time Out’s eating out section, amongst them Proper Burgers which I haven’t tried either.

A french restaurant I dined at twice this week, Bistro du Vin in Clerkenwell blew my odd socks off completely. They have been going for about a year, have another branch in Soho and serve up fantastic food including a bacon cheese burger, perfect fries with a mayo and ketchup mix. Amazingly they accept the aforementioned Taste card (don’t tell everybody).

On the local front we visited Union Bistro (blandly named or what?) in Abbeville, Clapham – a little sister restaurant to the way superior Trinity round the corner in the Old Town. Pleasant enough but I’d rather pay a little extra and eat like at a king at the latter where I’ve enjoyed a couple of very fine meals. We also recently had lunch in Soho’s Dean Street Townhouse which is a beautiful brasserie with copious cool artwork adorning the walls. I wasn’t mad about their lunch menu but our Italian waiter was  most charming and attentive. You can also have afternoon tea in an adjoining space here, but you’d best book as the somewhat aloof female door keeper doesn’t seem keen on drop-ins.

Finally a somewhat rare phenomenon in London, a restaurant where you can’t book a table for dinner until August, due to its across the board five star reviews. It’s called Dabbous, in Whitfield Street, on the site of a former internet cafe, and Ollie Dabbous is apparently doing something extraordinary there with modern European dishes. A punter of mine confirmed it’s class, but told me that it can get noisy, so not your ideal lunch biz destination. I did manage to get a lunch booking for two months time, but sadly now can’t get there that day!

Next stop is Pollen Street Social run by a Heston B sidekick, to meet some of Claire’s friends. Let’s see if it warrants a blog of its own.