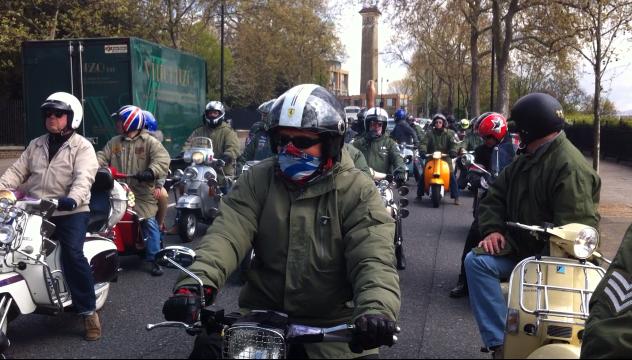 I like shopping and I like eBay, and while browsing a few weeks ago I saw a most lovely five year old retro-style Vespa PX125 listed. It had barely any miles on it and had a multitude of extra chrome bit add ons, and looked gorgeous in black. Now Claire my partner had seen a poster advertising a scooter rally titled “Scoot The Thames” and had said how much fun that might be and could we go? I explained that you can’t turn up to these sort of events on a twist & go Honda Dylan scooter as we’d be laughed off the road or told kindly to bugger off and stop spoiling the look for everyone else. Fast forward ten days or so and I’d made the completely unnecessary purchase of this Vespa and we were ready to rock…or whatever Mods usually do on their scooters!

It’s Saturday noon and we pull up at the  quirky Scooter Cafe in Lower Marsh near Waterloo to see about 70 assorted scooters most with at least a few accessories, but some folk had spent more on accessories than their actual scooters… A lot of headlights, mirrors and mudguard mascots. Vespas and Lambrettas pretty much make up the scooter world; the latter have a longer body, look cooler but aren’t as reliable. Some of these scooters were 50-60 years old and  absolutely stunning. One was like a pickup truck with a super-sized wicker square basket on the back with a young lad in, taking photos as we went along. There was also an old Triumph car leading the rally, with a cool looking couple up front and a chap shooting video in the back. The riders were a motley crew, many in their 40’s, 50’s and 60’s – the older ones might have looked more at home in a garden centre rather than a scooter rally. The majority were wearing very clean-looking long green parkas with sewn on name badges, sargeant stripes and the likes. I was surprised to see very few Harringtons, another staple jacket of Mod types ( I was wearing an unusual black leather Batacuta Harrington,  and Claire was cooly clad in her leopard skin coat) Initially I felt a frosty reception but after parking up and gradually getting chatting to a few of the bods I felt more relaxed.

There were only handful of women and even fewer were riding these lovely machines. One, a young Canadian woman suggested my cutting out problem might be down to dirty spark-plugs. She said she also had a big BMW R75 motorcycle which she was riding somewhat illegally. Claire will hopefully soon have  ukelele lessons with the only other female rider, whom she got talking with, who lives round the corner from us near Loughborough Junction. Another chap we met called Bunny had been in an acid-jazz band called Mother Earth. This nickname had surely come about as a result of his two front teeth. I admired his Ocean Pacific Omega watch and told him I was pretty sure I have had one of his records in the past. He has clearly been around the scene the best part of 30 years now over 50 himself. One couple who rode up front most of the time we thought were letting the side down when it came to sartorial style. The female pillion was wearing Timberland style boots, badly frayed jeans and a grubby old leather jacket whilst he was wearing a tracksuit that looked like it came from Aldi.

When it came to the route, the words p*ss-up and brewery came to mind. You’d think that winding snake style over one bridge and then back over the next would be an obvious easy choice but no this would have been too straight forward. We travelled quite slowly and there were many momentary stops to get clarity on where we were going and then a U-turn to boot on Chelsea embankment when someone  obviously realised we were missing a golden pose opportunity on King’s Road Chelsea. Big Bob, a  sweary man with a glass eye and a heavily scarred face was very much in charge and gave us all a very brief outline of the ride. We speculated about how he might have sustained the injuries, and narrowed it down to either a near fatal articulated truck/scooter accident or  an extremely vicious gang fight (Mods V Rockers?). He was riding up the front and at one stage near a busy round-about,  noticed a damsel in distress broken down in a classic car, and got off his scooter to help push start her. It was almost like a setup. At one stage a Honda Dylan appeared and joined us, althought the chap on it was delivering pizza. This provoked a good chuckle and some harmless jeering.

The mid-way stop off point was The Armoury pub in Wandsworth where we got chatting to another few people including including a Knowledge boy who introduced me to another cabbie called Mingy who was part of the Immediate Scooter Club. Some of you may remember this record label where they took their name from. Claire had got a bit chilly, and I’d only had half a nights sleep after a particularly busy Friday night on the road, so we decided to quit while we were ahead. Both of us would thoroughly recommend an outing like this as something very different to do in London, although you do really need to source yourself a scooter and preferably one with gears (not twist & go) if you want to be down with the rest of them. The Parka is optional!